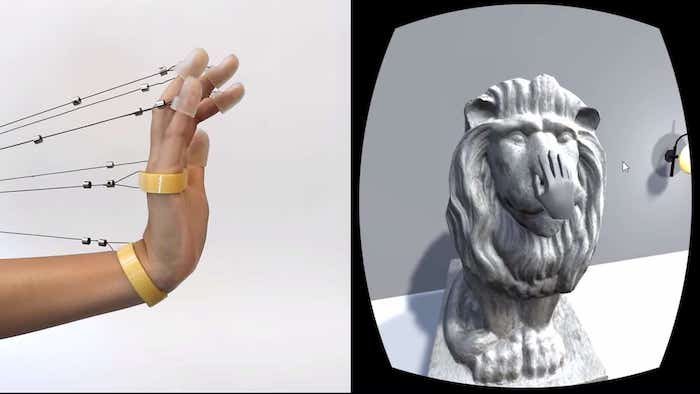 The already numerous arsenal of technical means for simulating tactile sensations in virtual reality has been enriched by an original novelty. The technology called “Wireality” is the development of a team of researchers from Carnegie Mellon University (USA). They decided to use the mass of a person’s own body and a system of tension-controlled cables to give the user’s hands new possibilities in VR.

The Wireality system is attached to the operator’s shoulders, his body becoming the support for a system of dozens of thin threads. They stretch from the shoulders to the arms, attached to each finger, palm and wrist. The cords have separate tensioning mechanisms controlled by a common controller, which, in turn, works in tandem with the BP headset.

When the user moves freely in the BP, there is no tension on the cables. But when he rests against an obstacle and starts to feel it or tries to interact with a virtual object, the system is activated. It is perceived as an inability or difficulty to “push” the surface of the virtual object with the finger, because the tension mechanism counteracts the force of the finger. This feeling differs at each point of contact between the hand and the object, which creates the illusion of touching a real, solid and firm object.

Developers say they have mastered even complex reliefs imitation, and with Wireality, the user can touch and learn the structure of sculptures or mechanisms. At the same time, the area of operation is limited by the space in front of them, and the cable system does not allow performing acrobatic tricks. The weight of the prototype is 273 grams, but there is only 11 grams directly on the hands, so they do not get tired.